Does Round Up Kill Moss?

Round up does NOT kill moss. The main ingredient in Round up is glyphosate and glyphosate has no effect on moss. Different weedkillers have to work in different ways because all plants can grow differently. To kill moss you need a specific herbicide (weedkiller).

There are many different moss killers on the market and many are very effective. However, there are two that stand out from all the rest. Both of these moss killers are actually natural occurring products. I know, I can hear you shouting “If its natural it won’t be as good as those nasty chemicals” but don’t switch off just yet.

What will kill moss?

The two products for killing moss are Pelargonic acid and Sodium Percarbonate. In 30 years of gardening, I have embarrassingly poured £1000s of chemicals on tarmac driveways, paths and even the roofs of houses, in an attempt to kill moss. You do not need to use the two products together but each product has its own pros and cons.

Pelargonic acid is an organic compound found naturally in plants and it will kill moss, very quickly. The chemical is supplied as a concentrate and when mixed with water, can be applied to the moss with a sprayer. There is however, one disadvantage, the pelargonic acid will not destroy the moss spores, so there is a chance the moss could grow back on the surface.

Pelargonic acid is now used as a successful lawn moss killer because the acid does not kill the grass. Just a word of warning though, some herbicides containing pelargonic acid, can also contain other ingredients which may harm the grass.

This is because pelargonic acid is a very successful weedkiller and most customers who purchase a weedkiller expect it to kill grass too! Therefore the manufacturers may include a growth retarding chemical to kill the grass and stop the weeds regrowing. 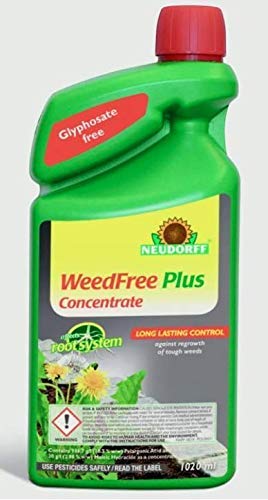 Sodium percarbonate is a dry form of hydrogen peroxide and it is very good at killing moss. The main advantage of using this granule to kill moss is that it also kills the moss spores, which is how the moss reproduces, therefore reducing the chance of the moss returning.

In my opinion it is the best moss killer for tarmac drives, block paving and tiled roofs, for one very good reason. When the granules react with water they produce bubbly oxygen which soaks the moss and seeps into all the cracks and crevices that make up tarmac and hard surfaces, killing the spores as it goes. Boom! no returning moss. I have written many posts on where and how to use sodium percarbonate, you can find them HERE.

Moss killers can be expensive, so it is tempting to try to use round up to kill moss. Unfortunately, this is a false economy and you will be wasting your hard-earned money. Always use the correct herbicide for the range of weeds you need to kill, this will save you money in the long term and get the job done quickly successfully.

If you have a large area like a tarmac driveway or tiled roof, I would suggest using sodium percarbonate as the granules are easy to spread. You will use approximately 40 grams per square metre. Sodium percarbonate can be bought online from amazon.co.uk but can be expensive. Ebay.co.uk is often better value.

Neudorff produces pelargonic acid concentrate and this is ideal for killing moss on a small driveway or path. Both the Neudorff weedkiller and the Neudorff moss and algae killer will kill moss, ideal if you want to kill the weeds in your driveway too. I have dedicated a separate post to Neudorff weed and moss killers, mainly because I think they are such successful products, if not a little on the expensive side! Read the article HERE.

What is a Rain Gauge and How Does it Work?

When Can I Move a Plant that’s in the Wrong Place?

What Basic Garden Tools do I Need?

£6.99
We use cookies to ensure that we give you the best experience on our website. If you continue to use this site we will assume that you are happy with it.Ok